Can You Make Sugar Free Pudding with Almond Milk?

In today’s world, people are increasingly looking for dairy-free and sugar free meal options, which can be especially difficult when it comes to dessert. When catering to dietary needs, would almond milk and other dairy-free alternatives work to make a sugar free pudding?

Can Sugar Free Pudding Be Thickened with Almond Milk?

Sugar free pudding can be made with almond milk, but it’ll have a slightly different consistency than pudding made with regular milk. For instant sugar-free pudding mix, you’ll need to change the ratio in order for it to thicken. If using almond milk to make pudding, you’re more likely to get a better result from regular cooked pudding mix (as opposed to instant).

As I stated above, you should be able to thicken pudding with almond milk, but it does present a number of unique obstacles you might encounter that you wouldn’t using regular milk. I’ll help explain the some of the science behind thickening agents and sweeteners in sugar free pudding so you can troubleshoot problems that may arise.

How Do You Make Sugar Free Pudding with Almond Milk?

I highly recommend using a “cook and serve” pudding mix rather than instant if you are using almond milk or another milk substitute. Even though the instructions on the box will warn not to use milk substitutes, it is possible. For traditional pudding mix that is cooked, start with slightly less milk than what is called for, and slowly add in more almond milk as necessary until you reach your desired consistency.

To make sugar-free pudding using almond milk and instant pudding mix, you cannot simply follow the instructions on the box. While this might end up working out ok with cooked pudding, with instant pudding mix you’ll end up with something that is much too runny to be considered pudding at all. The reason for this is that instant pudding mix contains a thickening agent called tetrasodium pyrophosphate (also known as TSPP) that reacts with calcium. While dairy milk is a great source of calcium, almond milk does not naturally contain any calcium, although often times it is fortified, so be sure to check your nutrition label.

The type of almond milk used makes a big difference—refrigerated products work better than shelf-stable milk because of the differing pasteurization levels. Homemade almond milk doesn’t work as well for pudding, instant pudding in particular, because of its lack of calcium. It’s also because the products sold in grocery stores contain additives that emulsify and thicken it, which helps your pudding turn out thicker and smoother. You can use homemade if that’s what you have but be aware you may need to include additional thickening agents to get the proper consistency.

How Do You Fix Pudding with Almond Milk?

If you’re looking into this question, it’s likely you’ve already tried to make pudding with almond milk and it’s turned out runny. There are a couple of solutions to fix this.  Since you need a higher ratio of pudding mix to milk when you’re using dairy-free milk, you could fix the ratio by adding another packet of pudding, or a partial pudding packet. Since pudding mix contains cornstarch as its primary thickener, you can also try adding more cornstarch in the form of a slurry. Cornstarch must be heated to work as a thickener, so you’ll have to reheat the pudding if it’s already been cooled.

You can also try folding in a dairy-free whipped cream, such as those made from canned coconut milk or similar store-bought versions. This will produce a consistency that’s closer to a mousse than a traditional pudding, but it should help thicken it up a bit for a more appealing dessert.

What Are Other Milk Substitutions for Pudding?

There are a lot of options for milk substitutes for pudding depending on your personal preferences and dietary needs. Other dairy-free milks such as rice milk and soymilk will also work for pudding, following the same guidelines used for almond milk. Nut milks add flavor that compliments vanilla or chocolate flavored puddings. Rice milk is a good neutral choice because it has practically no aftertaste.

Some milk alternatives have stronger flavor and aftertaste than others, so it just depends on what you like.  Water can even be used in place for milk in pudding. This presents similar problems to using thinner dairy-free milks or skim milk, so it will result in a thinner consistency and will require less liquid overall, but it is possible!

Sugar-free pudding mix is sweetened with artificial sweeteners including aspartame and acesulfame potassium. It also contains maltodextrin, which is a common additive used for thickening and preservation. Maltodextrin is classified as a starch, so it doesn’t count towards added sugars, but the way your body reacts to it is much like sugar. It’s actually even higher on the glycemic index than sugar, which is a concern for diabetics since it can spike blood sugar quickly.

Can You Make Almond Milk Pudding Without Cornstarch?

Traditional pudding, whether from a mix or homemade, is thickened with cornstarch. However, you can make pudding without cornstarch by substituting other types of starch that have similar thickening properties—tapioca starch, for example. The base of a pudding is a traditional custard—made from eggs, milk, and sugar, and just requires some sort of additional thickening agent. There are non-traditional pudding recipes that use flour and butter in the form of a roux, or gelatin to thicken.

If you’re looking to make a vegan pudding without cornstarch, you’ll need to make sure your thickening agent is vegan which rules out a traditional roux or gelatin. For homemade pudding, you’ll also need to substitute something for the eggs. Eggs are crucial to binding and adding the creamy richness to homemade pudding. To make a vegan pudding from scratch, you can add a banana to add that creamy quality. Bananas also provide additional starch which will help thicken the pudding.

Pudding mix is typically vegan, it just contains cornstarch. So, as long as you use dairy-free milk, pudding made from a mix will be vegan. Double check the ingredient list to make sure the pudding mix doesn’t contain gelatin, but most commercial pudding mix brands don’t.

Lindsey Blogs, Almond Milk Pudding in an Instant – it IS Possible!

Anna Shaefer, Healthline, Is Maltodextrin Bad For Me?

What is French Toast Fried In?

Can I Use Cheddar Cheese Instead of Mozzarella? When and When Not to Substitute 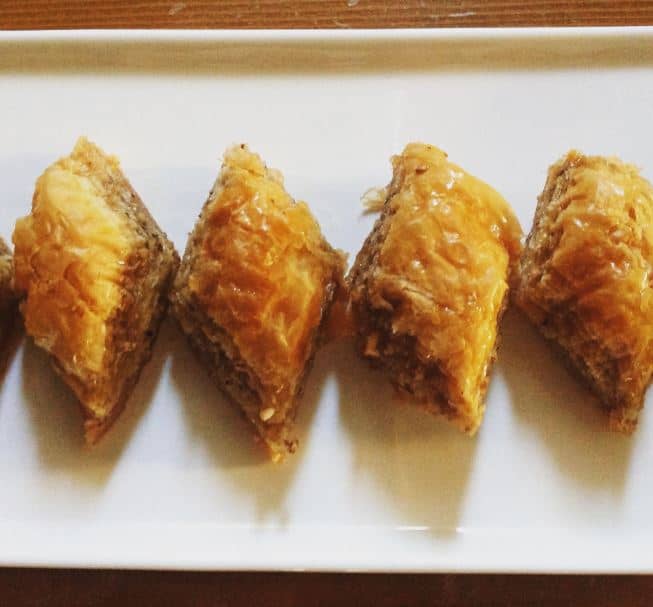 What is the Best Pan for Baklava? Make Sure Your Elegant Treat Comes Out Perfect…

[Do You Need a Loaf Pan] to Make Banana Bread? Get Creative in the Kitchen

[What Kind of Pan] Do You Bake Cinnamon Rolls in? So Many Choices!

Please go to the Instagram Feed settings page to create a feed.