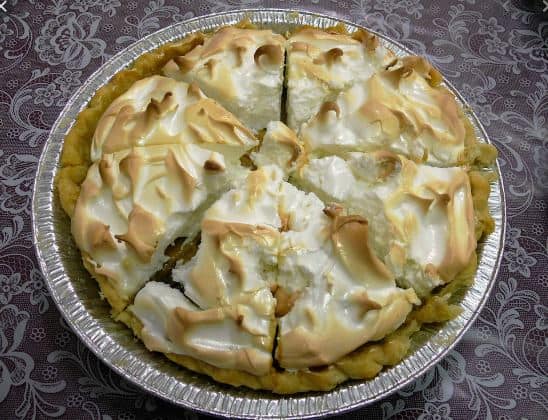 We’ll use a store bought crust to save you tons of time. Want to know a secret? They almost all taste just as good as the homemade stuff anyways! Regardless, the real star of the show is the sour cream raisin filling. It’s a new take on an old, traditional family recipe that will delight your dinner guests.

Start by preheating your oven to 425 degrees. In a large bowl, mix the eggs with the sugar and vinegar. Be sure to combine everything well and dissolve the sugar as much as possible. Then add the rest of the ingredients and stir well.

Roll out your store bought pie crust into the pie pan of your choice. A nice, heavy-bottomed one will work well for this recipe. Some sour cream raisin pie recipes call for blind baking the crust to prevent it from getting soggy. Blind baking is where you bake just the crust (and sometimes some pie weights to prevent bubbling) in the pan for 10 to 15 minutes. I haven’t found it to be necessary for this recipe, but it’s a good troubleshooting step if your crust doesn’t turn out how you wanted!

Next, pour the filling mixture into the crust. Place the pie into the oven and bake at 425 for 5 or so minutes. Now reduce the temperature to 375 and bake for 15-20 more minutes. You’ll know the pie is done when the filling is set and no longer jiggly when you wiggle the pan.

Remove from the oven and cool completely on a wire rack to prevent the pie from cooking further. Enjoy warm or cold, the choice is up to you! See below for my favorite toppings.

How long does sour cream last after you open it?

Sour cream actually has a surprisingly long shelf life. The official USDA recommendation is that it is good for 3 weeks after the sell-by date on the package as long as it has been refrigerated. This applies to both opened and unopened sour cream, so don’t worry if you have some left over after this recipe!

If you’re curious if your sour cream is still good to eat, there are a few telltale signs of spoilage that almost anyone can spot. Keep in mind that these may occur before the sell-by or use-by date, so be sure to use your best judgement and don’t trust the numbers 100%.

Smell is often the first indicator of a spoiled dairy product, and sour cream is no exception. It is a “live” product, similar to yogurt, so it might always have a bit of an odor due to the fermentation it is undergoing. However, if you smell something “off”, don’t hesitate to toss your sour cream.

Discoloration is another good hint as to when your sour cream has passed its peak. It should be a pure white color, so if you see any hints of yellow or other colors you’ll definitely want to buy a new container.

Finally, mold growth is an obvious sign of spoiled food. Unlike some cheeses where you can safely eat around the mold, sour cream with any hint of bacterial or fungal growth should be tossed immediately.

Can you freeze raisin pie?

It is not recommended to freeze sour cream raisin pie. Its custard filling does not do well when thawed and usually ends up separating, which makes the texture very bad and unappetizing. The crust will end up soggy and inedible as well. Instead of freezing, I would recommend either making a smaller batch if you can’t eat it all or sharing with friends and family. Thankfully, it does hold up in the fridge very well for up to a week, and who doesn’t love leftover pie?

How do you make sour cream from scratch?

Don’t want to run to the grocery store to make this delicious sour cream raisin pie? No worries! Sour cream can be made easily at home, it just takes a few simple ingredients and some time.

The main way to make sour cream at home is by using heavy cream and buttermilk in a 4:1 ratio. For example, 1 cup heavy cream to ¼ cup buttermilk. Mix these two together vigorously and place in a sterilized glass jar. You can even shake them once they’re in the jar. Not only is it fun, it will help give your final product a much silkier and thicker consistency.

Don’t attempt to use anything besides a glass container! Things like plastic are impossible to get clean enough for fermentation. If your container isn’t clean, you risk introducing harmful bacteria. Cleaning and sterilizing a glass jar is easy, simply boil the jar and lid for up to 10 minutes to eliminate possible contaminants. Cool before adding the sour cream mixture, though.

A short-cut method is to use 1 cup heavy cream, ¼ regular milk of your choice, and a few teaspoons of lemon juice or plain white vinegar. The result will be much thinner than the buttermilk method, but can be used when sour cream is needed in a recipe in a pinch.

Whichever method you choose, you’ll need to cover the container with something breathable but still sealed. Some options include a paper towel or dish cloth over the mouth of the jar secured with a rubber band. Don’t use plastic wrap or the jar lid as these won’t allow it to “breath”. Leave your creation out at room temperature for 24 hours, then mix a bit and refrigerate for up to two weeks!

While sour cream and raisin pie is a pretty old-school, traditional recipe, it can still be spiced up to suit anyone’s tastes!

Something that I’ve seen quite a few people do is add a meringue topping. This looks so delicious, and I can’t wait until I make my next sour cream raisin pie to try it out! To add a meringue topping to your pie, follow the same directions for making the filling. In a separate large bowl, beat together 3 egg whites with a pinch of salt while gradually adding in 6 tablespoons of sugar. This will take a while, so be sure not to add the sugar too quickly! We’re aiming for still peaks stage.

Once you’ve filled the pie with the regular filling, bake for 5-10 minutes or until the filling is just beginning to set. Carefully remove the pie and spread your meringue over top of the filling, being careful not to crack or break it. Bake for an additional 10-15 minutes or until the meringue is golden brown on the peaks and the pie filling has set. Cool and serve immediately.

You can also change up the raisin variety or use other dried fruits such as cherries, cranberries, apricots, and more! Whatever dried fruit suits your taste should work great. If the fruit comes in larger pieces, it would be best to chop them up to achieve a nicer texture.