Kitchen Essentials for Asian Cooking: How to Stock Your Kitchen 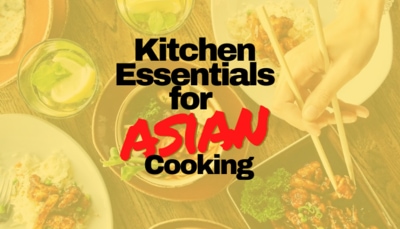 First, it’s important to note that Asian Cooking varies significantly across the continent, from one country to another and even between different regions within a country. That being said, Asian cuisines do share some similarities in terms of ingredients, methods, and equipment.

What are the Main Ingredients and Essential Tools in Asian Cooking?

This table shows an expansive (but non-inclusive) list of essential Asian food ingredients and cooking tools:

We’ll go into more detail about these items below. Keep reading to learn more about our essential Asian ingredients list.

Ginger, garlic, and scallions are known as the aromatic trinity in Chinese cooking, especially Cantonese-style. The first part of the trio, ginger, is used as a primary flavoring ingredient throughout Asia. It is available fresh or dried and ground. Ginger is praised for its essential oils that aid in digestion, and fresh pickled ginger is commonly served alongside sushi as a palette cleanser.

Another part of the trinity, garlic, is widely used in Asian cuisine. It’s often used fresh, but also available pre-minced in oil or water, or in dried form, either minced or granulated. Oftentimes it’s a major component of Chinese sauces like chili-garlic sauce.

Sesame seeds are used in a multitude of ways in Chinese cooking. They are used in salads, desserts, and as a popular garnish on stir fries and noodle dishes. There are white and black sesame seeds, but the distinction has more to do with presentation than differences in flavor. Sesame seeds are also sold toasted but toasting them yourself right before cooking helps to bring out the aroma.

Curry pastes come in a variety of colors and flavors and are essential flavor bases in Thai cuisine. Aromatic ingredients such as lemongrass, garlic, chilis, spices, galangal, and shrimp paste are blended together to a fine paste, which then is added in small quantities to soups, marinades, and curries for a bright and often spicy burst of flavor.

Rice is a huge staple in the majority of Asian nations because of the amount of rice that is grown there. There are many different types of rice—white, brown, black, long or short grain, Thai sticky rice, or Indian Basmati.  One of the most widely used varieties is long grain jasmine white rice– this one happens to be native to Thailand and is praised for its flavor and fragrance.

Soy sauce is a thin, savory sauce made from fermented wheat and soybeans. It comes in different varieties—dark soy being thicker and sweeter than light soy sauce. If you are gluten-intolerant, tamari is a sauce very similar to soy sauce that is made from only soybeans and therefore is gluten-free.

Rice vinegar, made from fermented rice, is an essential ingredient for Chinese sweet-and-sour dishes. It’s also used frequently in stir fries and salad dressings to add acidity and a bit of sweetness. I recommend the unseasoned products over pre-seasoned rice vinegars for added versatility, but seasoned rice vinegar is a popular product too.

Palm sugar is a type of unrefined sweetener derived from the sap of any variety of palm tree plants.  It adds a slightly caramelized flavor similar to brown sugar and is the sweetener of choice in Thai curries and Vietnamese marinated meats. Palm sugar usually comes in block form which can be softened or melted, but is also available in easy-to-use granulated form.

Fermented black soybeans, or Douchi, are lightly salted and fermented, resulting in big savory umami flavor. They are also oftentimes then ground to a paste and used in a variety of sauces in Cantonese and Sichuan cooking, like this highly rated black bean garlic sauce.

Canned coconut milk is useful to have on hand for a number of classic Asian dishes, including Thai curries and mango sticky rice. It’s available in light varieties too, but I prefer the full-fat version for its versatility. When coconut milk sits, the thicker cream separates from the milk, and the cream in particular offers a lot of flavor and creamy texture.

Many Chinese recipes, specifically Sichuan recipes, call for chilis to give heat and flavor to a dish. Long green hot peppers and small red chili peppers are both commonly used fresh, the latter being a bit spicier. Dried red chilis are also a very common ingredient, available whole or ground, and give a signature deep red color to Sichuan dishes. This top-selling brand sells both mild hot and medium hot options.

If you haven’t tried Sichuan peppercorns yet, they have a very unique flavor that’s a bit hard to describe. They aren’t spicy or sharp like most other peppercorns, but they have a mild citrusy flavor and leave a tingly sensation on the tongue. A must-try!

Cornstarch may not seem like a uniquely Chinese ingredient, but the way in which it is used is a bit different in China compared to the United States. Cornstarch is the starch of choice when it comes to thickening sauces or lightly coating meat in stir fries in Chinese cuisine, lending that distinguishable texture to Chinese food.

This thick, almost syrupy sauce flavored with oysters is a key ingredient in stir fry sauce, as well as other traditional Chinese sauces. Oyster sauce can also be used on its own, as a drizzle over broccoli, for example.

Hoisin sauce is a thick, sweet condiment, almost like a Chinese BBQ sauce. Like soy sauce, it is made from fermented soybeans and then flavored with additional spices and sweeteners, such as garlic, sesame, sugar, and Chinese five-spice.

This rice wine from the Shaoxing region of eastern China gives a distinct flavor and depth to soups and sauces. It is similar to Japanese sake or dry sherry.

As an island nation, there are naturally many different kinds of seaweed used in the cuisine of Japan. Nori sheets are essential to make sushi rolls, while kombu is used to flavor dashi, a Japanese vegetarian broth.

White miso is a paste made of salted fermented soybeans and white rice. There are other types of miso—red miso or yellow miso, for example—that have different intensities and flavor profiles depending on their ingredients, but they are all produced by fermentation and add a unique flavor in Japanese soups and broths.

Mirin is a sweet Japanese cooking wine made from rice. It is fairly similar in taste to Chinese Shaoxing wine but is a little more viscous and much sweeter—it is used in addition to sugar to sweeten teriyaki sauce.

Soba noodles are long noodles made from buckwheat flour. They are often used in noodle soup dishes or served cold with sesame oil and soy sauce.

Mushrooms are used frequently in Japanese cooking both fresh and dried. Keeping dried shiitake mushrooms on hand makes it easy to add a ton of umami flavor to Japanese soups and other dishes.

To make sushi, the type of rice used is very important. Sushi is made with short grain, high starch white rice because it stays sticky and soft even after cooling, unlike long grain rice which would dry out and not be sticky enough to hold the sushi together. To make sushi rice, you only need to add a small amount of rice vinegar and sugar to the cooked short grain rice.

Woks are large carbon steel round-bottomed pans with handles that are traditionally used to make Chinese stir fries but are also used in other cultures. The idea of a wok is to quickly cook small cuts of food over very high heat while moving the ingredients around constantly. Most stovetops don’t accommodate the round bottom, but modern woks are available with a flat bottom and rounded sides. This model even has a scratch resistant nonstick coating.

Steaming is a common healthy cooking method in many Asian nations. There are several different apparatuses that can be used to steam ingredients, including electric and stainless steel, but I prefer a traditional bamboo steamer to prepare and serve Chinese dishes like dim sum.

Since rice is such an essential part of Asian cuisine, I recommend investing in an electric rice cooker for perfectly cooked rice every time. They come in a variety of sizes depending on how many people you’re cooking for.

Chopsticks are the eating utensil used in many Asian countries including China, Japan, Korea, and Vietnam. It’s important to note there is a proper etiquette to using chopsticks in most Asian cultures. Bamboo chopsticks are available for single-use and reusable metal or heat-resistant fiberglass chopsticks are also widely available.

Scissors are used very frequently in Korean cooking for a variety of tasks including cutting scallions, noodles, and meat for Korean BBQ. These scissors are specifically designed for cutting Kalbi meat and feature very sharp blades.

Woven mats made from bamboo are traditionally used to make maki sushi rolls by rolling raw fish and vegetable fillings inside of seaweed sheets and vinegared sushi rice. While you don’t absolutely need a sushi mat to make this type of sushi roll, it certainly helps and is fun to learn the traditional way.

If you’re new to Asian cooking, check out this highly rated bamboo sushi making set which includes two sushi rolling mats, chopsticks, a paddle and a spreader. It even comes with a beginner’s guide PDF file to get you started!