[What Kind of Pan] Do You Bake Cinnamon Rolls in? So Many Choices! - Recipe Recon

If you’ve ever wondered what kind of pan you should make cinnamon rolls in, today is your lucky day! I’m going to share with you a bunch of different options, all with amazing results.

What Kind of Pan Do You Bake Cinnamon Rolls in?

Cinnamon rolls have different variations throughout the world, but are traditionally made by rolling out a sweet, yeasted dough, spreading a cinnamon-sugar filling, rolling into a log and slicing into individual rolls. The rolls are then baked in a pan—typically a cake pan, like this one from USA PAN Bakeware, although there are other options too. 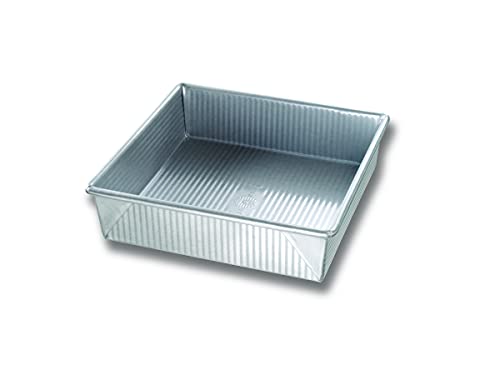 When choosing a baking vessel, cinnamon rolls are one of the most versatile baked goods I can think of. While most recipes call for a cake pan, I’m going to share with you some unique ways to bake cinnamon buns that are equally as delicious, and how using different pans can create different desirable effects in the finished product.

How to Make Cinnamon Rolls

As with most baked goods, there are different methods to make cinnamon rolls, so this can vary quite a bit. To get you familiar with the process before we look into different methods, here is a basic rundown:

What’s the Best Pan to Make Cinnamon Rolls in?

Most cinnamon roll recipes call for either a square or round cake pan, and with good reason. Cinnamon rolls traditionally are touching while they bake, ensuring they rise up and don’t spread out too much. Nestling the cinnamon buns so that they touch also produces the softest, fluffiest rolls, which is what most people desire when they think of the ideal cinnamon bun.

Cast-iron pans are another common choice. In addition to retaining heat extremely well, it also makes for an attractive serving vessel.  Whether you go cast-iron or aluminum cake pan, I recommend using a pan that’s at least an inch deep, to prevent spillage which can cause smoking and a big mess in the bottom of the oven.

What Are Some Other Ways to Make Cinnamon Rolls?

There are many cinnamon roll recipes readily available on the internet, and I’ve seen a lot of different pans used successfully. Sheet pans, for example, are a great option for making larger batches of cinnamon rolls. If you do decide to use a sheet pan, there are a few extra precautions you should take to prevent leakage. First, choose a baking sheet with a lip rather than a flat cookie sheet. Secondly, take extra care in the steps of rolling and filling. Leave a border around the rolled-out dough when spreading the filling, roll tightly, and be sure to pinch and seal the dough where the edge meets the roll after rolling.

When you make cinnamon rolls in a cake pan, the rolls in the center will be soft and tender throughout, but the exterior rolls will have a bit of a crust with a nice golden color on the part that was touching the outside of the pan. If you’re someone who enjoys the outside rolls more, you might want to try making cinnamon rolls in an edge brownie pan or a muffin tin. 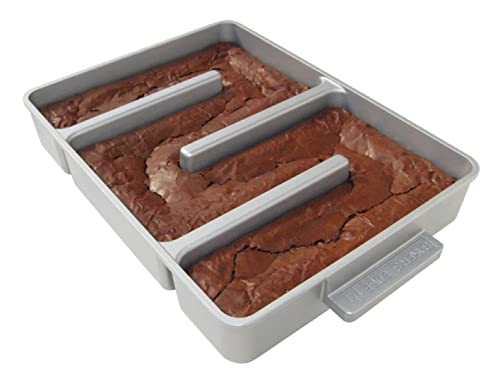 These pans will both contain the rolls so that they expand up and not out but will also provide an aluminum edge on more sides of each roll, maximizing the crusty golden exterior pieces.

Although cinnamon buns are typically baked touching one another, there are some recipes that suggest leaving space in between. This is another method that results in that crustier exterior, and leaving some space in between achieves this result whether you’re using a baking sheet, cake pan, or cast-iron pan. While not necessarily traditional, it really comes down to personal preference.

You can even make cinnamon rolls in a slow cooker! If you’re someone who prefers the inside pieces with very soft, fluffy edges, you might want to give this method a try. It results in cinnamon rolls that are extremely soft and chewy—even the tops that would typically be toasty will be soft and supple instead. If you choose this method but still want to have a toasted golden top, you can always place them in the oven for a few minutes after removing from the slow cooker to achieve that effect. Again, it all comes down to personal preference, so experiment and find out what you like best!

Can I Use a Glass Pan to Bake Cinnamon Rolls?

You can definitely use a glass pan to bake cinnamon rolls but be aware of how using a glass pan instead of metal might affect your baking. Glass doesn’t conduct heat as well as metal, which means it’s slower to heat than metal pans. However, glass is also a better insulator, which means that it retains heat better than metal. Most sources will tell you to lower the oven temperature by 25 degrees when using a glass pan, and you will likely need to increase the baking time by up to ten minutes.

Luckily for soft yeasted rolls like cinnamon rolls, there is a pretty foolproof way to tell if they are done—taking the internal temperature. A thermometer inserted into a cinnamon roll should read 190 to 200 degrees when they are done. The tricky part is getting them to this point at the same time you reach your desired doneness on the outside in terms of color and texture. If the rolls are browning too fast, you can always cover them with aluminum foil while they finish cooking.

How Do You Prep a Pan for Cinnamon Rolls?

Cinnamon rolls are sticky by nature—especially when the filling leaks out which is prone to happen, especially when you’re just starting out. To prevent the rolls from sticking to the pan, the pan should be well greased, no matter what kind of pan you are using. You can use either a neutral oil or butter to grease the pan—I usually use butter because I prefer the taste. Simply roll down the wrapper of a stick of butter and grease all the interior edges with it.

Additionally, I recommend lining the bottom of the pan with parchment, no matter what kind of pan you use. This further prevents sticking and allows you to more easily save some of the filling if it ends up leaking. With these tips, you’ll be on your way to freshly baked cinnamon rolls in no time! Happy baking!

[Do You Need a Loaf Pan] to Make Banana Bread? Get Creative in the Kitchen

[Is Fried Rice Paleo??] Using Rice Alternatives, it Can Be!