How Do You Thicken Instant Pudding? - Recipe Recon

Instant pudding mix gives you a delicious hassle-free dessert ready to eat within minutes. But too often something happens, it doesn’t set quite right and you end up a bowl of chocolate soup instead. How do you thicken instant pudding, and how can you ensure that your pudding thickens properly?

How Do You Thicken Instant Pudding that is Too Thin?

To thicken instant pudding that is too thin, first make sure it’s fully mixed so that the mix is fully dissolved. If it is but it still hasn’t thickened, you will have to add more starch, either cornstarch or another alternative, to thicken it up to the right consistency. Whatever starch you use, be sure to heat it to the point of gelatinization, which differs based on the type of starch.

Different starches also have different thickening power, so you may need to use more of one than another for the same thickening effects. Now that you know how to rescue a pudding that’s too thin, let’s look into how to guarantee your pudding thickens in the first place and what causes that to happen in instant pudding.

Can I Add Cornstarch to Thicken Instant Pudding?

Simply adding cornstarch to instant pudding will unfortunately not help to thicken it. The reason for this is that cornstarch needs to be heated until almost boiling in order for it to work as a thickening agent. Most other starches also need to be heated to some degree before they begin to gelatinize—these include all-purpose flour, corn flour, and tapioca.

To thicken instant pudding with cornstarch, make a slurry by mixing equal parts cornstarch and water, heat the instant pudding, and then whisk in the cornstarch mixture. The reason for making a slurry first rather than adding powdered cornstarch straight to the pudding is to prevent clumping.

Slowly add a little bit at a time until you reach desired consistency. It’s important to realize that while the mixture is heated it will still look thin, but it will thicken as it cools. Th pudding mixture will need to be heated to a strong simmer, almost boiling, for about 20-30 seconds in order for it to work properly.

As I mentioned previously, modified cornstarch is an ingredient found in commercial instant pudding mix, but it acts very differently than regular cornstarch. Modified cornstarch and other food starches, which are usually made from a combination of corn, wheat, potato, and/or tapioca, are modified in a number of ways.

First, and most importantly for pudding, these modified starches act more quickly and under a wider range of temperatures than regular cornstarch which requires heat to work.  They also are modified to increase shelf life and increase ability to stabilize and emulsify, in addition to increased thickening power.

Can I Thicken my Pudding with Tapioca or Arrowroot?

If you don’t have cornstarch, you can also use other starches to thicken, such as tapioca. Whatever starch you use, be sure to heat it to the point of gelatinization, which differs based on the type of starch. Different starches also have different thickening power, so you may need to use more of one than another for the same thickening effects.

For example, arrowroot flour is a gluten-free starch that gelatinizes at lower temperatures than most other starches, which makes it a good option if you’re making homemade pudding that includes eggs. Since you don’t want to heat the eggs too much to the point that they will coagulate, you can just slightly heat up the mixture and the arrowroot will be able to thicken it up.

However, when arrowroot is mixed with dairy, it has unique properties that can cause an unpleasant sliminess, so it might not be the best choice for pudding for that reason, although it has been proven to work well in pudding for some.

The easiest way to thicken instant pudding that is too thin is to add another packet or partial packet of instant pudding mix. This will increase the ratio of starches and thickening agents to liquid, which should thicken it to the right consistency.

Why Isn’t My Instant Pudding Setting?

If made correctly, instant pudding should firm up very quickly—after about five minutes. If after that timeframe your pudding still isn’t set, it could be for a variety of reasons. First, you could have added too much liquid. Double check the instructions and that your measurements are correct. If you’ve accidentally added too much milk, you will need to go back and add mix or starches to balance it out.

Another reason for pudding not setting could be due to the type of milk used. Whole milk is highly recommended for the best pudding results. Skim milk, or dairy-free milk alternatives like almond milk or soymilk, may not thicken as well and adjustments to the pudding recipe should be made in order to maintain the correct consistency.

For more information on how using different types of milk effects the outcome of pudding, check out this Recipe Recon article.

Commercial instant pudding mix contains a flavorless, odorless, water-soluble compound called tetrasodium pyrophosphate (also known as TSPP) that is responsible for thickening (unlike traditional pudding mix, which is thickened by cornstarch). TSPP works by reacting with the calcium present in milk to activate the gelation process.

Why Did My Instant Pudding Turn Watery?

As I mentioned before, not mixing enough is a potential reason for pudding not thickening properly. On the other end of the spectrum, mixing too much can actually cause the gelatinizing molecular structures to eventually reverse and break down.

Once your pudding is fully mixed and looks like it’s beginning to set, make sure to let it sit undisturbed for five minutes. If you’re mixing and all of a sudden it seems like the mixture is getting thinner, that’s a sign that it’s time to stop mixing.

Unlike cook and serve pudding mixes, instant pudding does not need to be heated. If you’ve for whatever reason heated up your instant pudding, it’s actually possible to heat the pudding for too long so that the starch and thickening agents will break down and the pudding will turn watery.

This can be remedied by bringing the mixture back to room temperature, then reheating for a second time and adding another cornstarch slurry mixture, careful this time around to only heat for about 20 seconds so its thickening power sticks.

Although it seems like there’s a lot that could potentially go wrong from instant pudding, luckily, there are a lot of easy fixes too. Hopefully with these tips, you’ll be able to salvage your pudding and end up with a delicious dessert!

Seasoned Advice, Why Won’t My Pudding Thicken Up?

The 3 Best Rolls for Pulled Pork: Soft and Sweet is the Way to Go 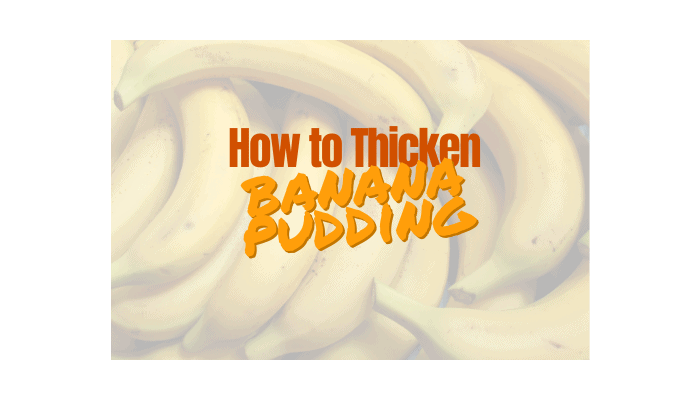 How to Thicken Banana Pudding for the Perfect Consistency

Please go to the Instagram Feed settings page to create a feed.